DroneShield Ltd (ASX: DRO) (“DroneShield” or the “Company”) is pleased to announce a sale of its DroneGun tactical drone jammer product to the Ministry of Defense of a Middle Eastern country through the Company’s relevant distributor. The country is closely allied with the Western countries.

This is the first reported sale of a tactical drone jammer product to a Middle Eastern government by any supplier.

The unit was purchased (at a full rate price) on the basis of being a test unit, with a potential follow up order on a large scale to provide that country’s military with a counter-drone capability. The order comes against a back-drop of rapidly rising terrorist activity, including ISIS formally announcing last month the establishment of a new “Unmanned Aircraft of the Mujahideen” unit, a fleet of modified drones equipped with bombs. When announcing what effectively amounts to an establishment of an airforce, ISIS also claimed that its drones had killed or wounded 39 Iraqi soldiers in a single week.https://www.washingtonpost.com / world / national-security /use-of-weaponized-drones-by-isis-spurs-terrorism-fears /2017/02/21 / 9d83d51e-f382-11e6-8d72-263470bf0401_story.html?utm_term = .04cc72c79fe8) 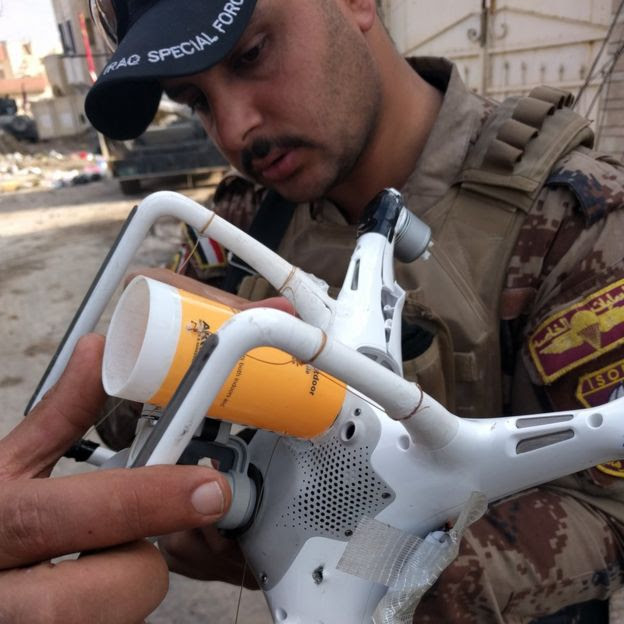 Governments in the region and elsewhere are acutely aware of the threat posed by commercial grade drones adapted for unlawful use by terrorists, organized criminal networks, and other nefarious users.
It is understood that the customer Ministry of Defense, as well as a number of other potential customers currently reviewing DroneGun, have undertaken an extensive review process benchmarking DroneGun against several competing solutions and, in the end, DroneShield’s products beat out the competition for several key reasons, as follows.

Effectiveness
DroneGun is a universally effective product against a wide range of drones, and does not rely on individual “hacks” to take control of the drone – unlike “cyber” technologies advertised in some of the products in the sector. Such cyber solutions are specific to each individual drone make and model – and often are not effective against frequency hopper models such as DJI Phantom 4, which is one of the most popular drone models in the market today.

Mobility and Deployability
DroneGun is a highly mobile product with a weight of approximately 5kg. This allows the user to deploy the product on patrols, or inside vehicles or near entrances to bases, as appropriate.

Availability
DroneGun is an existing product capable of deployment, as opposed to hypothetical “vaporware” solutions being publicized by some potential competitors, which are at best prototypes.

Affordability
While, as set out above, most drone security solutions one might read about in the press are “vaporware” concepts, there are drone mitigation products currently being offered by competitors, including several “prime defense contractors”, ie tier-one defense manufacturers.

The substantial cost of competing products has presented a substantial barrier to adoption of drone mitigation by budget-conscious government users. DroneGun is an affordable product whose cost is in the tens of thousands of dollars rather than hundreds of thousands or millions of dollars, per unit. Government users can therefore afford DroneGun in large numbers, propagate DroneGuns throughout their armed forces and law enforcement, and give their people, who put their lives on the line for their countries, this additional protective tool that would be unavailable to them with a more expensive system.

“We are glad to both be on the right side of the fight against terrorism and deliver commercial success to our shareholders,” said DroneShield’s Chairman Peter James from Sydney.