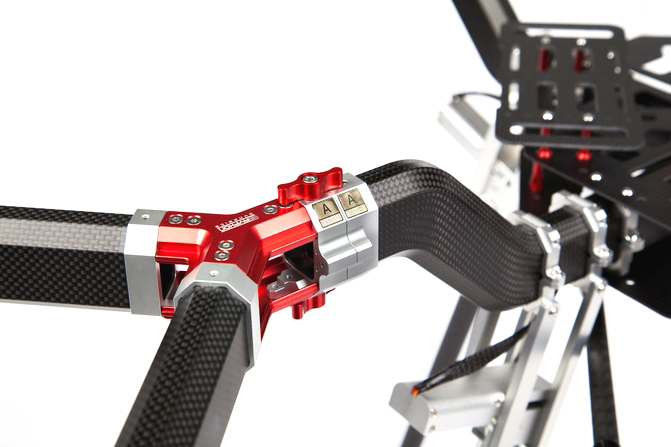 The frame is the load-bearing structure of the multicopter, which should be as light as possible, but still stable, practical and with good flight characteristics. The choice of material and the geometry of the frame structure have a significant impact on these properties. When it comes to the frame material used, weight, rigidity and strength are decisive. The strength describes, among other things, how much the material can be stressed before it breaks. The strength must be chosen so that the frame can carry the forces in use with a safety margin. Undersizing leads to premature breakage, oversizing leads to unnecessary ballast. The stiffness, on the other hand, describes the resistance to deformation, which depends on the material and the geometry. Deformations have negative effects on flight behavior and must therefore be kept as small as possible, or a high rigidity of the frame is an advantage.

Carbon – the material of choice

Materials such as carbon-fiber-reinforced plastics, colloquially known as carbon, meet these requirements very well because they are light, strong and stiff at the same time. Aluminum is very suitable for fittings such as spacers and connecting parts.

The crowd has to be in the center

The position of the mass elements in relation to the multicopter’s pivot point is also decisive for good flight behavior. The pivot point is roughly at the intersection of the propellers. The structure itself, but also accessories such as motors and especially batteries are inert masses. The further away from the fulcrum these mass elements are placed, the more sluggish the multicopter becomes. The center of gravity of all masses should also be on the Y axis of rotation (height axis) as close as possible to the pivot point. Curved cantilever arms can move the pivot point closer to the center of gravity.

It must also be ensured that the frame does not break in critical, i.e. difficult-to-repair areas, if it is overloaded. If a cantilever arm violently touches the ground, a predetermined breaking point, for example the connecting part between the center frame and the arm, should break, and not the center frame itself.

Usually vibrations come from improperly balanced propellers. The imbalance is absorbed by the motor bearings, the service life of which decreases with increasing load. The vibrations are transmitted via the motor to the frame structure and further to sensors and cameras. With acceleration and gyro sensors, vibrations lead to strong deflections, which have a negative effect on flight behavior and power consumption.

One more word about transportability: Foldable extension arms have proven to be very practical in practice. It is important to ensure that the electrical connections are made with continuous cabling as far as possible. If this is not possible, high-quality contacts must be ensured.