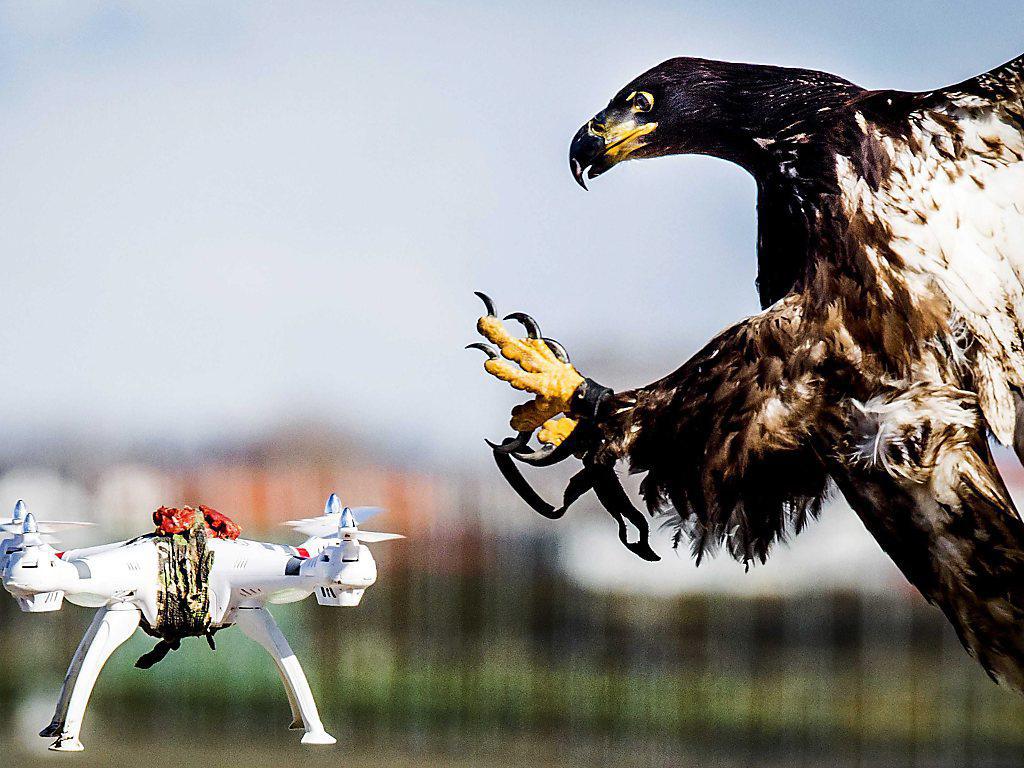 Contribution from the “Aargauer Zeitung” of October 22, 2016 with a mention of Koller Engineering:

Defense against drones has become a business. One that is growing rapidly. Some of the defense methods developed are adventurous

Drones have long been used in war: to spy on the enemy, to shoot at them. What is often forgotten, however, is that the much smaller, civilian drones are also a potential danger.

With their help, drugs and cell phones are smuggled into prisons, and strategically important facilities such as nuclear power plants can be spied on from the air. Another scenario: Terrorists could misuse drones to carry out an attack. How can the state defend itself against the danger from above? “Northwestern Switzerland” presents potential and bizarre measures that have already been implemented.

1 Why not use jammers to get the drones out of the sky?

Fetching drones from the sky can’t be that difficult, one might think at first. Simply install a jammer in no-fly zones that interrupts the connection between the drone and the remote control or, if necessary, the reception of GPS data. So-called jammers are already on the market, but they are prohibited under the Swiss Telecommunications Act.

The Federal Office of Communications would have to issue any special authorization. However, there are other obstacles, as the report “Civil drones in Switzerland” from a working group of the Federal Office of Civil Aviation states: “The frequency of the drone system must be known in order to disrupt it; In addition, the jammer threatens to hack the Wi-Fi reception in the neighborhood. ”

2 No undetected intrusion thanks to detectors

Detectors are currently a big issue, especially in prisons. The Lenzburg prison is planning to install such a system on the entire site. This would not render a drone harmless, but it would trigger an alarm when entering the airspace above the prison.

Depending on the type of detection system, the drones are detected using the acoustics or a radar system, for example. The Company Koller Engineering from Nottwil in the canton of Lucerne manufactures such systems. “The demand has increased lately,” said managing director Andreas Koller to the «Berner Zeitung». And: “Many companies get information from us, but still hesitate to buy.”

3 One shot, one bang and the drone is trapped in the net

Once the drone has been recognized, there are several ways to get hold of it. One of them: the Skywall 100, a kind of bazooka against drones. The impressive weapon from the British start-up OpenWorks Engineering is 1.3 meters long and 10 kilograms. The weapon fires a net that surrounds the drone and then gently parachutes it to the ground. Their disadvantage: their rather short range of 100 meters. The Lenzburg prison already has a net gun. But not as impressive as the Skywall 100.

The US aircraft manufacturer Boeing is also involved in the rapidly growing business with drone defense systems. The company has developed a portable device that can shoot down unmanned flying objects using a laser beam. The problem: the drone falls uncontrollably from the sky, which in turn poses a threat to people and objects.

5 When eagles guide drones to the ground

A very special type of drone defense is being tested in Holland: eagles. The animals are trained in a hall in The Hague by the company “Guard from Above” to attack drones and fetch them from the sky on command. The Dutch police see a great advantage in this method: the drone does not simply crash, as with other defense methods, but is guided more or less gently to the ground by the eagle. It is still unclear how great the risk of injury to the animals is.

An Austrian experienced that even wild eagles attack drones. His drone was attacked by two eagles in the air and pushed to the ground. They probably thought the drone was food. So it does work in the wild.

6 With good drones against bad drones

Bad drones are caught by good drones. This is the tactic used by the Metropolitan Police Department in Tokyo. Since last December there has been a special drone unit equipped with a camera and a two to three meter long network. This allows the drone policeman to intercept other flying objects.

Integrate 7 no-fly zones into the software

One possibility would be for manufacturers to integrate no-fly zones when programming the software. So that, for example, you cannot approach an airfield more than 5 kilometers. The private database NoFlyZone.org started collecting no-fly zones in 2015 in order to be able to pass them on to manufacturers.